There is no building industry

This text was initially published 2021 at bostadsbubblan.org

The fourth industrial revolution, Industry 4.0, involves the automation of the old classical industry. It includes robotics, the Internet of Things and real time links between machines and software. The concept also includes automatic quality controls, analyses and decoupling of the need for people to operate the machines.

The industry 4.0 concept has long been applied in, for example, the automotive, pharmaceutical and electronics industries.

As is well known, the first industrial revolution took place between the end of the 18th and early 19th centuries, when many previous artisanal works were replaced by machines.

So, here we are with more than two hundred years behind us since most industries left the craft in favor of mechanization, automation and digitalization. And every previous step is considered necessary for the next industrial revolution to take place.

And despite these two hundred years of development and success, the construction industry is stubbornly stuck in handicraft - that is, in the place the world was before the first industrial revolution.

Go out to any construction site, in any country and you will find lots of (often substantially low-paid) craftsmen literally carrying products around and manually placing them where they are supposed to be (according to a paper drawing).

And already on the idea level, the identification with construction as a craft is revealed, for example, by the fact that architects still say that they "draw" houses. The manual perspective continues throughout the process right into the management of real estate, which is mostly still based on an individual who "knows" their building.

Many examinations of the international construction industry have shown that it is among the least efficient industries in the world. Where all other industries have increased their profits, shortened their production times and increased quality, profits in the construction industry decrease. In addition, production times are increasing and not infrequently we see the quality deteriorating. It is also happens to be the least digitalized industry, only food production is internationally less digitalized.

The Empire State Building in New York was completed in 1930 in one year and 45 days (for a period they made of 20 floors in 20 days). This was possible thanks to the application of the entire palette of the second industrial revolution: standardization, prefabrication and an extremely strictly controlled production and design process. Very few construction projects today even come close to this efficiency. But it is not technology that is lacking; it is above all the processes that have not developed, but rather even gone backwards.

So, it is how we design, build and manage, that is the two-hundred-year challenge the construction industry refuses to embrace.

And what about the third industrial revolution for the construction industry? The digital revolution that fundamentally changed all other industries through computer control, developed processes and total control of everything from logistics, production and QA.

Sometime in the early 1990s, architects and engineers increasingly began investing in PCs and CAD software. Expensive investments in addition; around 1995, a good CAD computer could cost around $10,000, the CAD software 5,000 and training the employee at least as much. What was often completely missed, however, was to change the design process itself. It was assumed that the person working with CAD would cooperate in the same process as the other colleagues who at the same time, in the same projects, made their drawings with paper and pen. The view was not infrequently that "now that we have bought this expensive CAD station, we don’t want any more disruptions to the design work...".

At the same time, CAD investments created new problems – you needed to coordinate file formats, layer standards, coordinates and much more that had previously been unheard of. The design management rarely understood the new technology, which often resulted in constant misunderstandings between consulting groups due to computerization.

So, we computerized – not digitalized. By investing in computer technology, but not changing processes, the introduction of CAD and computers for the construction industry became another aggravating factor, another parameter that weighed down an already stagnant industry. Most other industries, on the other hand, have succeeded in this and the results have long been shown. It could be argued that the entry of computers into the construction industry is one of the main reasons why the industry today is so hopelessly inefficient.

And still the construction industry is lagging behind with heavy reluctant steps. The lack of law, methodology and organization is appalling.

Even the standardization initiatives that is going on in the industry, focuses on the old, non-digitalized, linear process of constantly interrupted information handovers between all the actors involved. This type of standardization fixates the entire industry into an inefficient, outdated and retrograde view, effectively preventing the third industrial revolution from gaining a foothold. The revolution that, by definition, must mean changing processes and organisations. And it needs to be standardized on this paradigm, not the old one.

In addition: standardization committees and regulations have rarely or never been able to initiate deep revolutionary changes. So, for a complete transformation of the industry, what we need are the good examples; companies and organizations that dare to digitalize, which have managements brave enough to push through new processes and eager enough to start chasing the profits that other industries have reaped for more than fifty years by now.

Fortunately, the good examples are everywhere to be found and technology is not what’s lacking. For decades there has been great innovation and massive industrial progress among manufacturers of building materials to the long-running and flexible prefabrication of the small house industry and from software developers to technology suppliers. The third industrial revolution is going on everywhere in the building industry. It just does not get applied across the board…especially in design, production and management...

Why do designers, contractors and property owners bite into an outdated, non-profitable and old process with major quality deficiencies?

Is it because they have become too comfortable? Fat cats syndrome with lack of competition among property owners and builders who accept low but safe profits? And if the industry is so hopelessly outdated, where are the new innovative players who could easily start making big profits and taking new market share? Are they being held back by a frightened industry? In fact, are they already here, but keep their successes secret so as not to be copied? Are structural factors such as standards, law and agreements hindering the innovative digitalized steps? Why is so little research and standardization work taking place regarding process and organisation and why does all the focus instead seem to be on trying to steer the new technology into the old backwaters?

And forget that the building industry should get started with the Internet of Things, Artificial Intelligence, Machine Learning and all the other cool technology that attracts! Because these concepts belong to the fourth industrial revolution. And before we can get on that train, we as an industry need to have come on board on the third industrial revolution train. And only then we may finally start talking about a building industry, no longer a gigantic and inefficient handicraft business. 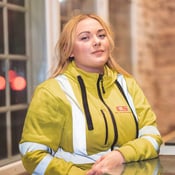